The celebration of Saint Nicholas in France and Europe

In some parts of France and Europe, Saint Nicholas Day is celebrated on December 6th, with a parade and distribution of sweets to those who have been good.

But where does this tradition come from, which has a foretaste of Christmas?

Who was Saint Nicholas?

At the origin of the character, a real person: Nicholas of Myra, also known as Nicholas of Bari. Born in the third century in Lycia, in the south of present-day Turkey, this bishop was in the eyes of everyone the protector of children, widows and the weakest people. A benevolent and generous man.

After his death, the miracles that began to be attributed to him are very numerous. According to some, he resurrected children who had been murdered by a butcher. Saint Nicholas then becomes the protector of children and by extension of the weakest.

Nowadays, we celebrate St. Nicholas on December 6, which would be the day of his death.

With his big beard, his mitre screwed on his head and his legendary good-
naturedness, St Nicholas is today a character that children in the North and East
of France and some European countries love to meet every year on December 6.

Where do we celebrate The Saint Nicholas?

In France, the communes of the North and the East are very numerous to pay homage to the St. Nicholas. The tradition of St. Nicholas also continues in many European and Eastern European countries such as Belgium, Germany, Austria, Croatia, Slovenia, Hungary, Poland the Czech Republic...

For a long time, this festival was more important for the inhabitants than Christmas.

How is Saint Nicholas celebrated?

Every year, during the night of December 5th to 6th, St. Nicholas comes down from the sky and enters the houses through the chimneys to distribute sweets to the good children (chocolates, apples, candies, dried fruits, gingerbread). As for the children, they must deposit a glass of milk for him, before bedtime. St. Nicholas historically travels with his donkey. For this reason,  little children must also bring food for the donkey (hay, grain or carrots). 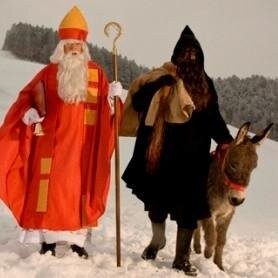 However, Saint Nicholas and his donkey are not the only ones to go around the houses.    ,    They are also accompanied by the scary Père Fouettard (whip father.)

This character dressed in black and with a long black beard is in charge of punishing                children who are not good. In some regions, he canes the children, in others, he threatens      to carry them away in his bag and sometimes he distributes coal, onions or potatoes. 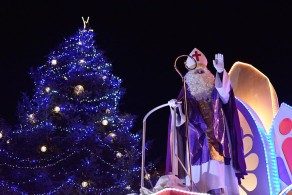 During the first weekend of December, many parades celebrating the arrival of Saint Nicholas are organized in the cities. The bishop, accompanied by his donkey and the Père Fouettard, parade in the streets on different floats and distribute sweets.

The parades organized for St. Nicholas are particularly magical in the French region of Lorraine, because he is the patron saint of this region. In the cities of Nancy and Metz, the parades even end with a fireworks display. 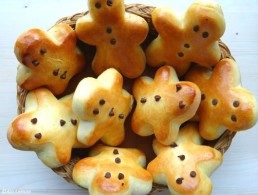 In some regions, buns in the shape of little men are prepared by bakers on the day of the celebration of Saint Nicholas. These buns usually accompany the hot chocolate of the children's snack. They can be decorated with raisins or chocolate chips.

Depending on the region, these little buns have a different name: "Mannele" in Alsace (which means "little man"), "Jean-Bonhomme" in Lorraine and Franche-Comté, "Boxemännchen" in Luxembourg and "Grittibänz" in Switzerland.