Today, we're showing  you how to cook a Tarte Tatin (Tatin Pie), a dessert originating from Centre-Val de Loire. According to legend, it was invented by two sisters who lived in the region: Caroline and Stéphanie Tatin.  Hence, the name Tarte Tatin. 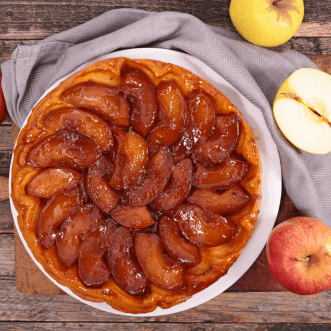 If you need help converting the units: Kitchen Calculator

How to make a Tarte Tatin?

2. Melt the butter directly on the stove in a non-stick round pie pan.

4. Lower heat to make a caramel.

5. Peel the apples. Cut them in half and remove the inside without breaking the halves. Arrange the apples in the dish.

6. Place an apple in the center of the dish. Flatten it from time to time with a spatula. The apples should dip into the caramel. Be careful: the caramel must not turn black!

7. Sprinkle the apples with vanilla sugar and cinnamon.

8. Remove the pan from the heat and cover it with the puff pastry.


Did you know that? The recipe of this pie is the subject of many enigmas: according to legend, the Tatin sisters invented it by accident! One legend has it that one of the sisters, while trying to make an apple pie, forgot the pastry and added it on top while cooking. Another legend says that one of the sisters dropped her apple pie when she took it out of the oven. To make up for her mistake, she picked up the pie and served it upside down!